History of the Chittenden Dammers

Permission to use the following quote about the history of The Chittenden Dammers was generously granted by The Chittenden Historical Society. The excerpt comes from a chapter in their book, Chittenden, Vermont: A Town History, written by Fran Wheeler and Karen Webster and is available for purchase. Karen also informs us the information for the chapter was from interviews with Ralph and Donnaleen Farwell, who also supplied the photos. See our Ralph Farwell Memorial photos on SmugMug.

If anyone would like to provide scans of more old snowmobiling photos please contact the Chittenden Historical Society and please upload them to our own SmugMug page as well! Here is a direct link to our SmugMug photo uploader. 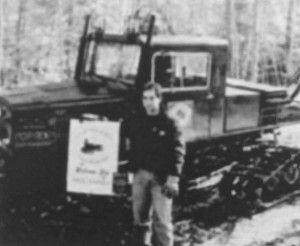 Some people know how to make the winter go faster. Members of the Chittenden Dammers Snowmobile Club know how to beat the cold and bad weather and have fun until Spring. 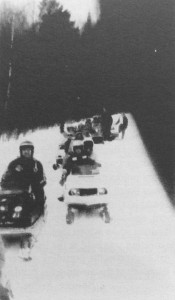 A ride above Mountain Top Inn

The Chittenden Dammers Snowmobile Club was organized in 1965 with 14 original members. Reggie Cook, the founder, served as the first president. In 1966 membership had grown to 25. By 2005 the roles exceeded 800 members. Not all members come from Chittenden. Nearly 30 percent of the members are from out of state, an average that is reflected statewide. People from other towns have joined the Chittenden club because of the number and quality of trails open and the availability of snow in Chittenden’s higher elevations. The group has continued to meet on a regular basis to discuss any concerns and nip problems in the bud.

The club has developed some 26 miles of trails across State and U.S.  Forest land as well as private properties belonging to resident and non-resident landowners. Trails have been opened and maintained only with a great deal of volunteer labor. For instance, in the summer of 1990, volunteer work teams undertook a VAST/Federal trail improvement project, working eight hours a day, five days a week. By early , bulldozer work was completed on four major trails including the Kiln Brook Trail, the Boiling Springs Trail, New Boston, Mount Carmel and North Pond Trail. These trails had water bars installed and were widened to at least 10 feet, ditched and resloped.

Chittenden Dammers were the State Club of the Year for 1991 and Ralph Farwell was named Snowmobiler of the Year for the work he did on the trails. Trails were expanded from four feet in width to 12 to 15 feet wide to accommodate the newer and wider snow groomers. “They went from cowpaths to interstates,” said Ralph. Accordingly, the Chittenden Dammers were one of the first snowmobile clubs in the state to have a modern snow groomer. In 1989, the club’s 1980 Tucker grooming machine was purchased for $14,000. In contrast, the machine used in 2004 cost over $100,000.

Community service has played a part in club history. Chittenden Dammers have long been called out to search for lost dogs and downed planes. Since 1972, the Rutland County Association, of which the Chittenden Dammers are a part, began raising funds for the Vermont Achievement Center (VAC), located in Rutalnd. First called the VAC ride, the event is now known as the Rutland County Charity Ride because funding to Camp TaKumTa, which provides a camping experience for Vermont children with cancer, was added in 2000.

The club has a booth at the State Fair. In 1978 Darren Parrish, son of Donnaleen and Ralph Farwell, as a sixth Grader won state competition for best safety poster for VAST.

In the early days of snowmobiling, the club was very active socially, but the club has gradually become quieter. Technology may have played the biggest part. With the advent of better, more reliable machines, people are more likely to go out on the snow alone, whereas in the old days they needed each other. 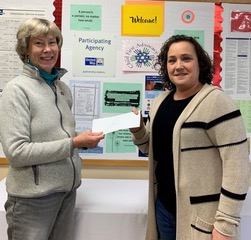 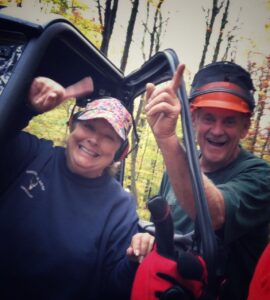 Dam Good Time is Back!